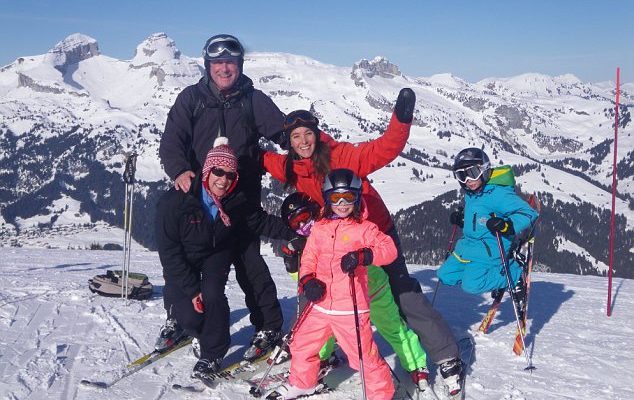 It’s snowing through shafts of sunshine as I look for the ‘snowbow’ that often graces Villars in the Swiss Rhone Alps. I feel cheated. Last time it snowed through a thin cloud layer, with dazzling brightness above, a multicoloured arc cascaded into the valley dividing the Grand Muverans and Dents du Midi mountains. It’s undoubtedly scenic, but the Villars-Gryon ski area has plenty of detractors.

‘Not enough skiing for a week’, ‘nothing challenging’, ‘too low to guarantee snow down to resort’ are the common accusations, coming mostly from people who have never been to Villars.

Sloping off: Neil, his girlfriend Isabelle, left, and a group of friends during their stay in Villars

But already this snow season, I’ve enjoyed skiing in Villars to rival anywhere in the Three Valleys or Verbier.

And I am not even counting the spiritual, moonlit run I took down to Villars with my girlfriend at 1.30am on New Year’s Day after a gourmet dinner at Lac des Chavonnes, one of Villars’ finest mountain restaurants, run by the noted chef Medou Rebzani.

Something’s going right because on one day between Christmas and New Year, a record-breaking 11,000 skiers purchased lift passes. Geneva is only 90 minutes’ drive away, which makes Villars highly weekendable.

One morning, I set out early with a group of friends, led by our guide Andreas, to the chairlift that transports you silently through a tranquil canyon to the Diablerets ski sector.

After another short skilift, there was a long and thrilling run from the Meilleret ridge down through Les Mazots, on the impeccably groomed piste that weaves through forest all the way to Diablerets village. But fresh powder beckoned higher up. We kicked off our skis where the bus stops to take eager passengers on the ten-minute ride to Col du Pillon, where a two-stage cable-car system whisks skiers to the 10,000ft peak.

From here it’s possible for novices to ski on the very gentle, wide blue graded runs on top of the glacier – and for strong intermediates to ski on a mix of red and black pistes on a sevenmile descent, broken by just one short chairlift, all the way to Reusch.

But we were here for the untracked snow, off-piste on Combe d’Audon. You must take a qualified guide, best organised through villars-experience.ch. It was incredible to think that while thousands battled for space on the pistes, we saw perhaps 100 people all day. I felt as if I owned the mountain and the snow was soft and quiet under ski.

Mother nature has played a big part in Villars’ success, but it has been aided by a stream of innovations, including the Under Nines Ski For Free policy. A fast telecabine to Roc d’Orsay, and artificial snow-making, have cut queues and ensure all but novices can ski down at the end of the day.

Start at 9am and it is possible for a strong intermediate to ski ten laps from Roc d’Orsay to the bottom of the telecabine before 11am – by then the most hardened of critics will be wondering where they are going to find the energy to ski the rest of the day.

A planned chairlift from Bretaye to Chaux Ronde will take further stress off the Lac Noir chair, which is already benefiting from the faster six-seater Petit Chamossaire chair.

Snow-making guns on the La Rasse liaison to Alpes des Chaux make this a more rewarding run, while skiers enjoying the open pistes from Croix des Chaux now have a pit stop at the restaurant L’Etable (etable-gryon.ch).

A range of tailor-made trips are available from momentumski.com (020 7371 9111), including three nights’ BB in the five-star Chalet RoyAlp Hotel departing March 17, for £688pp based on two sharing, including Gatwick to Geneva flights and car hire.