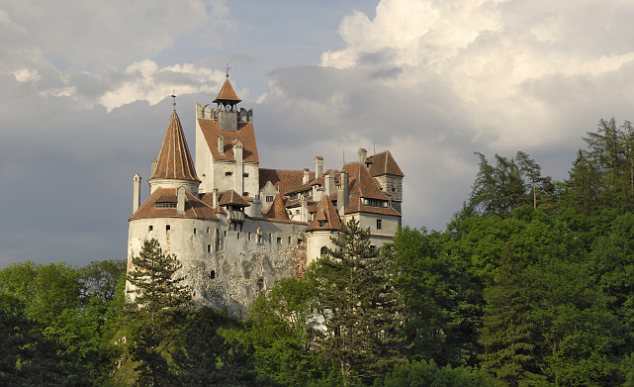 When you go to Transylvania you could be in for a big surprise. I’d expected fairytale castles, beautiful churches, a way of rural life stuck in the last century – but not bears. Not in Europe. Yet here I was in a clearing in the forest, watching 11 wild brown bears eating the equivalent for them of Coco Pops – a highly pungent mixture of cherries, oats, chocolate and dead mice.

We were in the relative safety of a hide halfway up a tree. But rather alarmingly, the door was kept open and you could hear the protective growl of the mother bear as she tried to stop her cubs wandering. Horribly interesting: Bran Castle is an eerily good match for Dracula’s fortress in the 1992 film

We had arrived just before dusk, having driven about ten miles along a track that was so bumpy that even a 4×4 had come to grief earlier in the day. We walked the last 300 yards, seeing bear-shaped shadows behind every tree.

As we took our seats in the hide, the forest ranger began emptying the food into hollowed-out logs. Five minutes later, there was the sound of something large crashing through the trees. The mother bear came first, followed by her cubs. She was dark brown, with a slightly lighter ruff, and stood about 3ft high at the shoulder when on all fours. At intervals, though, she would stand on her back legs, reaching up to about 5ft 6in, while looking around menacingly.

Next to arrive was a pregnant female and two adolescent males that burst into the clearing like football hooligans to be met by a distinctly unwelcoming growl from the mother bear. Eventually all 11 bears were snuffling around in front of us. But by that time it was almost totally dark and we had to leave the hide, which meant walking through the trees about ten yards from them. We didn’t need much telling to keep quiet because, though the bears are fed every day, they are definitely wild and females are very protective of their young. There are about 6,000 bears in the forests of Romania. I was in Transylvania, which means ‘beyond the forests’, but, nevertheless, large parts of the region’s Carpathian Mountains are wooded – and they’re very much off the beaten track.

Indeed, many villages are still connected only by mud roads. Even the main roads, like the spectacularly winding Transfagarasan Highway, are potted with holes. The other hazards on the roads are stray dogs, and horses and carts.

Ceausescu’s communist regime fell in 1989, but Romania, now in the European Union, remains a very poor country. Many peasants still scythe fields by hand, loading the hay on to wagons that seem in imminent danger of collapse. Coming down one perilous road, we saw a man fast asleep on his hay as his horse plodded home.

The villages now have electricity but in most respects they seem virtually untouched by the modern era. Many old ladies wear full black skirts and headscarves. On feast days, some wear elaborately embroidered village costumes, and many still pride themselves on keeping alive the traditional dances. Often, on the edge of villages and in the markets you see gypsy women in brightly coloured skirts and with plaits down to their waists. Main streets are lined with houses built in pairs, connected by wide barn doors, with yards for the animals behind. Stretching behind them are fields laid out in strips, as they were in medieval times.

The highlight of many of these villages is a fortified church with a pointed steeple and double walls. They were built by the Saxons, and fortified against the Turks.

The quiet in these villages is wonderful for anyone trying to get away from it all. Many don’t have a shop and you have to search for a bar, let alone a restaurant. If you do find somewhere to eat, it will serve only traditional peasant food such as the ubiquitous meatballs and a very heavy kind of polenta.

Some have tiny museums tucked away, like one near Sibiu where the orthodox priest had hidden hundreds of icons from the communists at great risk to his own life.

In another of the fortified churches, there was a room in the wall which used to be the old ‘matrimonial court’. Couples thinking of divorcing were locked in it together with only one bed and a knife and fork between them, until they saw the error of their ways.

But there is another side to tourism in Romania – much of it thanks to Bram Stoker, who wrote Dracula in the 19th Century, very loosely based on the bloodthirsty 15th Century Prince of Wallachia, Vlad the Impaler.

The real Vlad wasn’t a vampire, of course, but he did enjoy impaling enemies on stakes. Some 600 years later, any town that can claim a remote link with him does, and thousands of tourists make a pilgrimage to sites associated with him – however tenuous the link.

Bran Castle, with its fairytale turrets, was only a brief stopping-off point for Vlad but makes the most of the fact it looks just like the one in the 1992 Dracula film. All around it are stalls selling Dracula memorabilia, mugs, face masks, crossbows – and toy Kalashnikovs.

Another hill town nearby, Rasnov, is similarly surrounded by tat with a wooden vampire set up for photo ops, yet it is in a spectacular position, as is the real Dracula’s castle at Poenari.

I admit I didn’t climb the 1,480 steps as it was raining so hard it felt as if the Hollywood special-effects department had gone into overdrive. But the family staying in my hotel did. They had chosen to come to Romania partly because their daughter was a Goth.

Transylvania was perfect for them as they could go for long mountain walks and Hayley could satisfy her curiosity about vampires. When they went to Sighisoara, the medieval citadel where Dracula was born, people queued up to photograph her in her black make-up, alongside an image of the impaler. A nice twist: The Transfagarasan Highway is a thrill for petrol heads

We went to Romania with Secret Transylvania, a small travel company set up by a couple who first went to Romania to help out in an orphanage and fell in love with the country.

They have eight guests at a time to stay in their home near Sibiu, and drive you around the countryside. Di, a wonderful cook, provides a delicious breakfast and one homecooked meal a day. The other is included in the price but is eaten in a restaurant that is usually pretty basic.

It’s incredibly good value – I spent about £750 for the week, including spending money and an additional fee for the bear trip.

Included
in the price was one excursion I would never have done on my own. They said we were going to the salt lakes to swim. I imagined an isolated lake in the middle of fields with perhaps a few fishermen on it. Far from it. We rounded a corner, and to me it looked as if we were gazing into the bowels of hell.

All
around were muddy pools full of semi-naked figures, some smothered in black mud. I felt like running away, but Di’s husband, Jez, insisted it was part of the experience. So we covered each other with mud and slithered into the ponds. They are apparently more than 100ft deep but so salty you couldn’t turn over on your front, let alone drown.

The only danger was being crushed by other bodies. I found myself hanging on to a man’s trunks as I struggled to get out of the water with another woman trying – unsuccessfully – to hold on to me.

Another day, we drove over the Fagaras Mountains, past numerous Romanians cooking on open fires right beside the road, and down into the town of Curtea de Arges. It was the feast day of the local saint and the monastery was surrounded by people, mostly gypsies, determined to touch her coffin as it was paraded.

I was almost knocked over by women behind me as a boy tried to rub a toy gun on the coffin. Another woman was rebuked by the priest for trying to kiss the coffin while on her phone.

It reminded me of nearly being knocked over as a TV journalist by the crowds closing in on Tony Blair.

But it seemed a very, very long way away from England.